A half-length portrait of Lady Charles Fitzroy, nee Frances Mundy (1773-1797), wearing a white dress and a blue headdress. The painting is in an elaborately carved and gilded wood frame.

John Hoppner, the successor to the aristocratic British portrait painting tradition of Sir Joshua Reynolds and a rival to Sir Thomas Lawrence, was a favorite of Doris Duke's parents James B. and Nanaline Duke. By the time they purchased this half-length portrait in 1923, they already owned four other Hoppner portraits. Their first - the portrait of the young Charles Oldfield Bowles (son of the painter, Oldfield Bowles, 1739-1810) - was purchased at auction (Christie's) in 1907.

This portrait remained in the artist's studio after his death, which suggests the sitter might have died before the portrait was completed.

oil on canvas, in carved and gilded wood frame 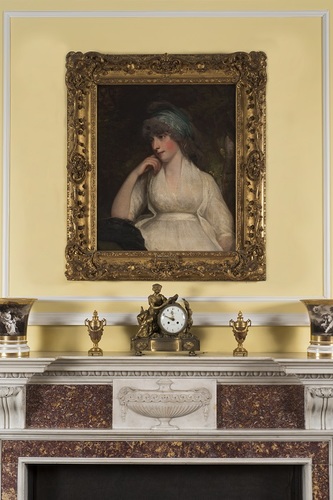